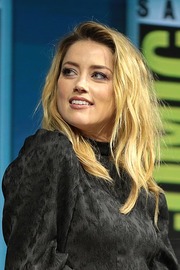 Amber Laura Heard is an American actress. After a series of small roles in film and television, Heard had her first starring role in the horror film All the... Wikipedia